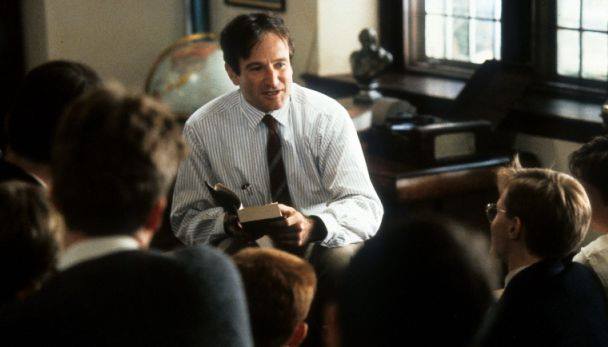 I have been thinking about the global outpouring of grief and disbelief upon the death of Robin Williams this week. Like so many others, I too sucked in a deep, shocked breath at the news, then desperately typed ‘Robin Williams death hoax’ into Google, only to be met with the horrifying reality that we had indeed lost another genius. As the days have passed, I have read wonderful things & horrible things; thankfully the ratio of good to bad seems to be hovering somewhere around 3000:1. It got me thinking; what earned this single actor a place in so many hearts?

The only answer I could come up with was, he was part of the childhoods of four generations of children. I am now forty and Robin Williams has been providing magic and mayhem in movie form for almost that entire time.

In the 70’s, he was our Mork; that slightly loopy, undeniably naive alien who made us laugh. In the early 80’s he was Popeye; splutterin’ and a stutterin’ his way to rescuing Olive Oyle. For me, the Blue Dolphin Hotel in Nambucca Heads will forever be remembered for that single movie; a rare holiday, a rare treat of a late night and Williams on the TV. Later in the 80’s he was our Adrian Cronauer in Good Morning Vietnam and taught a generation about the grey areas of war, whilst we annoyed our parents with screams of ‘Goooooooooooooood Morning [Your Town Here]’ whenever we felt like it. He was the English teacher we all desperately wanted in Dead Poets Society – and I will never hear ‘Oh Captain, my Captain’ or ‘Carpe Diem’ again, without my breath catching a little in my throat.

In the 90’s he was the most bangarang Peter Pan, buckling his swash against Dustin Hoffman in Hook. He was the slightly defective Batty in Fern Gully, helping save the rainforest from evil loggers – when he wasn’t crashing into trees. No one had ever had a friend like him in Aladdin, where he made Genie impossible to ignore and so very easy to love (millions of parents owe him a debt of gratitude for making the monotony of children’s movies less difficult to bear with his humour and in-jokes).

Continuing through the 90’s he was the heartbreakingly wonderful Leslie in Toys – a movie I have always loved, for its message about childhood, innocence and the option of growing older versus up. He was the incredible Mrs Doubtfire, who made a generation (or two) of children facing the reality of divorce, feel a little better about their world and the changes they were facing. He brought down the house (literally) in Jumanji and showed why board games are NEVER a good idea…ever.

He broke our hearts in the title role of Jack; another of his movies that I love for its message of tolerance, hope and acceptance. He was our mad Professor in Flubber, bringing a deeply flawed humanity to an otherwise two dimensional role. His return to University in Good Will Hunting left us breathless. Bereaved and damaged, his Sean will stay in the hearts of all who watched his performance. He followed it with an outstanding performance in What Dreams May Come – a beautifully worked movie that not everyone loved…but everyone should see, even if only once.

He was Patch Adams, a role that has come to mean more to me as a parent with a child who does regular hospital time. He upstaged Sam Neil (and that takes some doing!) as Bicentennial Man. Andrew, bringing humanity to the mechanical long before iRobot raised its ugly head, and saved a movie in the process.

In the noughties he made us laugh as the falling apart Fender in Robots, bringing a lot of Williams magic to the movie. He was terrifying as Sy in One Hour Photo – if there was an upsurge in home photo printer sales after its release, I would not be shocked. As Ramon and Lovelace in Happy Feet he brought song and dance to children everywhere and laughter to parents. In the Night at the Museum franchise he will forever be our glorious Teddy Roosevelt. On his steed, sword in hand. Victorious.

Robin Williams has been a part of every stage of my life, and that is true for so for many of us. His movies are part of our shared experience, which is perhaps why his loss is hitting so many of us so hard. His loss is a tragedy, not least for the family he leaves behind.

If there is a single ray of light to be found following his passing, it is that the horror of depression is being discussed on an international stage. Those who have been suffering in silence, now have a platform to say ‘I’m not OK’ and be listened to…and heard.

I will leave you with my favourite Williams moment, this Dead Poets Society speech that has stayed with me forever.

“They’re not that different from you, are they? Same haircuts. Full of hormones, just like you. Invincible, just like you feel. The world is their oyster. They believe they’re destined for great things, just like many of you, their eyes are full of hope, just like you. Did they wait until it was too late to make from their lives even one iota of what they were capable?

Because, you see gentlemen, these boys are now fertilizing daffodils. But if you listen real close, you can hear them whisper their legacy to you. Go on, lean in. Listen, you hear it? – – Carpe – – hear it? – – Carpe, carpe diem, seize the day boys, make your lives extraordinary.”

Oh Captain, my Captain, how I shall miss you.

This site uses Akismet to reduce spam. Learn how your comment data is processed.